Nanoparticles are particles that are smaller than 100 nanometer (1/10,000 millimeter) which is about 40,000 times thinner than a hair. There are two forms of nanoparticles: soluble and biodegradable nanoemulsions such as liposomes and insoluble nanopigments such as titanium dioxide and zinc oxide.

Nanoemulsions are cosmetic preparations containing oil and water droplets reduced to nanometric size to increase the content of nutritious oils while preserving the transparency of the formulas. They are used to protect fragile active ingredients, like vitamins, which are released upon contact with the skin. Nanoemulsions do not cross the skin barrier and are recognized as safe by Health Agencies.

Nanopigments are widely used in sunscreens and are generally considered safe although some Health Agencies ask for more safety studies to make final recommendations. 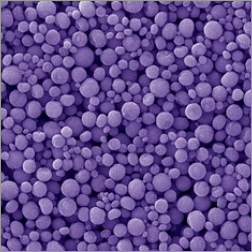 Nanopigments in cosmetic products are essentially used as UV-filters as they are able to reflect and scatter UV light. Interestingly, even at nanoscale when the particles become invisible they still absorb UV radiation even at a higher rate. Also, it has been shown that in sunscreen lotions, nano titanium dioxide is present in large clusters with a size much greater than 100 nanometer further increasing UV absorption. Nanopigments are thus increasingly being used in order to have broad-spectrum sun protection including UVA radiation.

Another advantage of nanopigments is that they usually do not cause cutaneous adverse side effects such as contact allergies and irritations like other sunscreen ingredients.

Moreover, nanopigments including micronized titanium dioxide and zinc oxide do not leave a white film on the skin but are transparent which facilitates usage and acceptance by consumers. As a consequence products containing nanopigments are used more often and applied in larger amounts thereby improving protection against UVA and UVB.

When assessing possible health risks associated with nanoparticles it is crucial to consider their possible uptake by the skin, especially the insoluble nanopigments. Should they become systemically available, translocation and eventual accumulation in secondary target organs may then occur.

Initial studies showed that when using accepted skin penetration protocols (intact skin), there is no conclusive evidence for skin penetration into viable tissue for particles of about 20 nm and larger primary particle size as used in sunscreens with physical UV-filters. Furthermore, subsequent studies, including those undertaken within the framework of the European Union research program NANODERM, concluded that nanopigments do not cross the skin barrier, even in cases where the skin is damaged, such as with psoriasis.